China’s vast security apparatus has moved quickly to quell the country’s mass protests, with police patrolling streets, checking cell phones, and even calling some demonstrators to warn them not to repeat their actions.

On Monday and Tuesday, police flooded the sites of protests held over the weekend, when thousands gathered to express their displeasure with the country’s strict zero-Covid policy, with some calling for greater democracy and freedom in an unprecedented show of dissent against Chinese leader Xi Jinping.

The heavy police presence has discouraged protesters from gathering since, and authorities in some cities have adopted surveillance tactics used to intimidate those who demonstrated over the weekend in the far western region of Xinjiang.

China’s domestic security chief vowed at a meeting Tuesday to “effectively maintain overall social stability,” in what appears to be the first official response – albeit veiled – to the protests.

Chen Wenqing urged law enforcement officials to “resolutely strike hard against infiltration and sabotage activities by hostile forces, as well as illegal and criminal acts that disrupt social order,” according to the state-run news agency Xinhua.

The harsh language could foreshadow a harsh crackdown. While local grievances are raised in China, the current wave of protests is the most widespread since the 1989 Tiananmen Square pro-democracy movement.

Political defiance is also unprecedented, with some protesters openly calling for the resignation of Xi, the country’s most powerful and authoritarian leader in decades.

Some of the most audacious protests occurred in Shanghai, where crowds demanded Xi’s removal two nights in a row. Tall barricades have completely blocked the sidewalks of Urumqi Road, the main protest site, making it nearly impossible for crowds to congregate.

Hundreds of police officers patrolled People’s Square, a large plaza in the city’s heart where some residents had planned to gather with white paper and candles on Monday evening.

Results suggest that Covid-19 could become a more lethal strain in the future.

Japan and the United States Have Sent a Warning to China, Promising to Work Together More on Defence

According to a protester at the scene, police also waited inside a subway station there, closing off all but one exit.

To protect the protesters from retaliation.

According to the protester, he saw police checking the cell phones of bystanders and asking them if they had installed virtual private networks (VPNs) that can be used to circumvent China’s internet firewall, or apps like Twitter and Telegram, which are banned in the country but are used by protesters.

“There were also police dogs present.” The protester described the atmosphere as “chilling.” 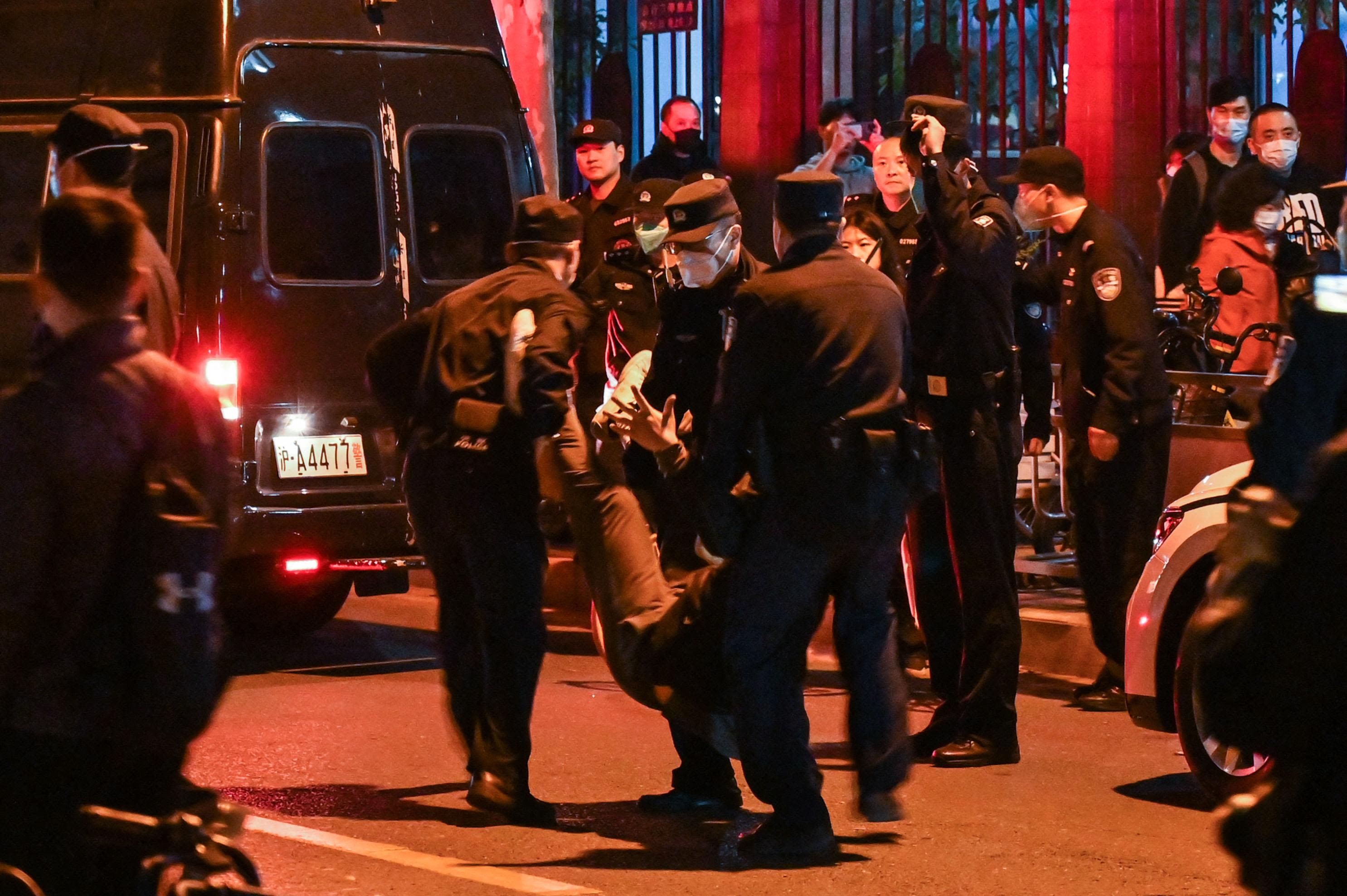 Protesters later decided to relocate their planned demonstration to another location, but by the time they arrived, security had already been increased there, according to one protester.

“There were too many cops, so we had to cancel,” he explained.

Another protester in Shanghai told that they were among “around 80 to 110” people detained by police on Saturday night and released 24 hours later.

They are unable to independently verify the number of detained protesters, and it is unclear how many people if any, remain in custody.

According to the protester, the detainees’ phones were confiscated on board a bus that transported them to a police station, where officers collected their fingerprints and retina patterns.

According to the protester, police informed those detained that they had been used by “ill-intentioned people who want to start a color revolution,” citing nationwide protests that occurred on the same day as evidence.

The protester claimed that after their release, police returned their phone and camera, but officers deleted the photo album and removed the WeChat social media app.

Read More: Biden and Xi Will Meet in Person for the First Time as Presidents

On Monday morning in Beijing, police vehicles, many of which were parked with their lights flashing, lined eerily quiet streets throughout the capital, including near Liangmaqiao in the city’s central Chaoyang district, where a large crowd of protesters had gathered Sunday night.

The march, which saw hundreds march down the city’s Third Ring Road, ended peacefully in the early hours of Monday under the watchful eye of police officers.

However, some protesters have received phone calls from the police asking about their participation.

According to one demonstrator, she received a phone call from a man identifying himself as a local police officer, asking if she was at the protest and what she saw there.

She was also told that if she had any complaints about the authorities, she should go to the police instead of engaging in “illegal activities” like protests.

“When dealing with us that night, the cops mostly acted calmly.” “However, the Communist Party is very good at punishing people afterward,” the demonstrator.

She stated that she did not wear a face mask during the protest. “I don’t think Omicron is that frightening,” she said.

However, her friends who wore masks to the protest also received police calls, some as late as 1 a.m., she added. 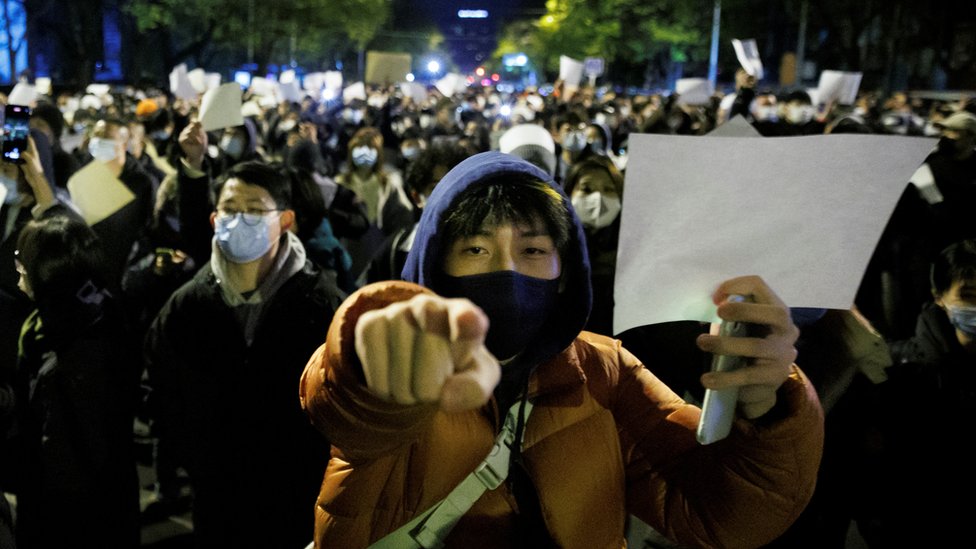 Nonetheless, the protester remained defiant. “It is our legitimate right to protest because the constitution guarantees us freedom of speech and freedom of assembly,” she explained.

Another protester, who has not heard from the police, told that she is concerned that she will be the next to be called upon.

“I can only find solace in telling myself that there were so many of us who participated in the protest that they can’t imprison a thousand people,” she said.

Meanwhile, some Beijing universities have arranged for students to return home early for winter break and take classes online, citing an effort to reduce Covid risks for students who use public transportation.

However, the arrangement conveniently discourages students from gathering, following weekend demonstrations on several campuses, including the prestigious Tsinghua University, where hundreds of students chanted for “Democracy and the rule of law!” “Freedom of speech!”

Beijing’s universities were the site of the 1919 May Fourth Movement, which gave birth to the Chinese Communist Party, as well as the 1989 Tiananmen Square protests, which were brutally suppressed by the Chinese military.